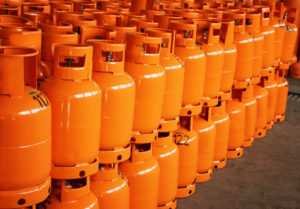 Residents of Lawrence, Andover, and North Andover, Massachusetts received a terrible wake-up call in early September as dozens of homes started to seemingly spontaneously combust. One man was killed due to a stray chimney that had been blown off a roof, and another 25 were injured as over 8,000 people fled their homes in fear. The cause was attributed to over-pressurized and outdated gas lines that had burst.

The sites are still being investigated so many homes are without gas; as the weather begins to turn colder, this presents a serious problem for the northeastern state. One clever family, the Fechts, created a solution to the fact that many are without hot water: a temporary heating fix using propane tanks. The setup involves a bathtub with lights and hanging plants, concealed under an ice fishing shelter. The outdoor shower, which they made for the entire community, is powered by propane: as water from the outdoor hose goes through a propane heater, families can finally enjoy a nice, hot shower.

“I think we’re going to be using it for quite a while, not sure. We thought we’d have fun with it, and make it as comfortable as possible,” Alison Fecht said.

Construction crews are working on the pipelines as we speak, but are not expected to finish until November 19th — when snow could very well be falling from the sky. Studies have recently discovered that productivity levels are highest at a temperature of 71.6 degrees Fahrenheit, so they’ll no doubt be equipped with their own propane heater rentals and temporary heating for construction. Hopefully, as a result, they’ll be able to get the work done much faster.

Since thousands of residents are going to be left without gas service until nearly Thanksgiving, many have been inspired to find their own solutions — some run water hoses through propane heater rentals into their own bathrooms, while others use bucket heaters to create hot water in large amounts that they can then transfer to camper showers. Perhaps those without their own tools and supplies will turn to rental heaters to get through the coming chilly days. With rental air conditioners a thing of the soon-to-be-long past summer, we hope the residents can find a way to stay warm.